Daniel Redman has been a marketing professional for more than 13 years. In 2006 Daniel co-founded the eVisibility media department, quickly building it up to a million dollar revenue channel. As one of the early and continuing pioneers of Emerging Media Marketing, Daniel has managed campaigns for several flagship clients and been a source of innovation.  In his spare time, he noticed some online buzz around ugly sweaters which led to the purchase of BuyUglySweaters.com which now forwards to UglySweaters.com.

Mike: Dan, what’s the attraction, especially around the holidays, to people and ugly sweaters?

Dan: Deep down, we all just want to be loved, Mike. We want to feel apart of a community and like we belong. With a strong sense of irony in fashion, trendsetters arrived at Ugly Sweaters about ten years ago and now this thing has gone totally mainstream. It’s a recipe of nostalgia, anarchy, and humor that make it a necessity for people to have at least one ‘show stopping’ sweater in their arsenal.

Mike: I see today that BuyUglySweaters.com forwards to UglySweaters.com. Did you find that the shorter name draws more traffic? Can you share your traffic numbers?

Dan: Not necessarily more traffic overall with the shorter domain, but 1000% more direct traffic. I believe I have the most recognizable domain in the niche. Because I was one of the only folks around doing this crazy thing in 09, I was able to rank organically very easily (with BuyUglySweaters as the primary) and tipped 3mil pageviews in my first year. As a number of competitors have moved in since, with deep pockets, it’s much leaner these days.

Mike: Tell me about your initial purchase of these names. Were you the first to register or did you purchase the names on the aftermarket? If so, can you tell us about the process? The price?

Dan: I started with BuyUglySweaters in 09 from GoDaddy after noticing that a very fashion forward Facebook friend was talking about an Ugly Sweater party with her cool friend, then later researched and found that search volume was steadily upticking. I then purchased UglySweaters from a broker a few years later that reached out to me. I was surprised that it just sort of fell in my lap that way. I started with ‘BuyUgly…’ because I assumed that it would hold more purchase intent for visitors. This is the type of niche where buying intent is sometimes hard to find. Crafty folks might just be hunting around for ideas or examples of sweaters. The UglySweaters domain typically gets a few offers for purchase every year as it’s somewhat of a rarity to have the exact match for such a large search set.

Mike: Do you have other domain names?

Dan: Of course, I’m a recovering domain hoarder. At one time I had over 70 domains in my portfolio when I was attempting to build an advertising network. I’ve paired it down to about 15 now. Some are pretty interesting, others will likely never see the light of day, like ZikaVirusDating.com <—what was I thinking? 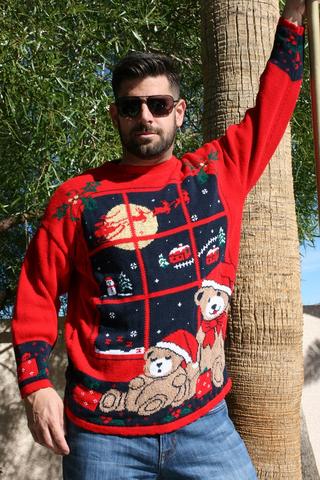 Mike: It looks like you are using Shopify as you platform. How did you decided on that and are you happy with your decision? What are a few of the pros and cons?

Dan: I have enjoyed my experience with Shopify thus far, however it is pretty darn expensive. Since I’m a one man show for most things, It’s a must though. I have grown my business using their apps and saved a plethora of time not having to dig into code or hire out work. I’ve always used ecomm through WordPress and a free shopping cart back in the day. WP took too much time for me and the Free cart had some security issues that ended up costing me.

Mike: Have you found the desire for ugly sweaters has increased or decreased since you began selling?

Dan: Increased dramatically! It now has bonafied staying power. Target and Urban Outfitters carry their own lines of Ugly Sweaters and there are some ecommerce brands doing millions in revenue. It’s crazy to see how far it’s come. When I first started doing this I was interviewed by Entrepreneur online and I sort of cast this category off entirely as a fad. I’ve been proven wrong.

Mike: How important is social media to your site?

Dan: It’s important, but I can’t claim to have totally maximized it. We have a small but loyal following on both Twitter and Facebook, of which I primarily use as backstops for paid ads. All in all we know that direct traffic is going to be our bread and butter and taking up real estate in the SERPs.

Mike: What has been the hardest or most unexpected hurdle to running an online business?

Dan: Dealing with a mass influx of competition. Affiliates, money backed businesses that are just chasing the SEMrush reports have all taken sizable chunks out of our business. I never expected UglySweaters to be a thing beyond a year or two, so I didn’t build a fortress like I could have.

Over 400 Great Domains Pointing to Other Domains

What to do with those names you are...

The Subject is the Most Important Part of...

Interesting business and interview. Shows you can make a living out of funny things.

Reply Retweet Favorite
What if every address had its own domain name? #domaining #domains https://t.co/Fghz7edWva

Building on a Bad Domain