The Model T, 8 Tracks, and WWW

Interviewing so many end users, a couple of things have come to my attention.  First there are some people out there with a great understanding of the power of domain names.  Second, there are way more people that still reference “www” in their domain names in normal conversation and in business than I would have expected.  There’s not necessarily anything wrong with that, but it just seems a little out dated to me.  More of a personal preference.

I can remember television commercials in the 90’s and early 00’s that would reference “http://” as part of the full name.  The announcer would rattle off “h-t-t-p colon forward slash forward slash w-w-w….”  Thankfully we have moved away from that, but people are still vocalizing the “www” when it’s just not necessary.  Sure, some people include that as part of their domain name in many cases.  I still come across the occasional site that doesn’t load without the “www” and I think that’s a poor decision.

In my opinion, referencing www is like sort of like announcing the “1” in front of a phone number.  Not really a big deal, but not necessary.  Technology, particularly the Internet, moves fast.  It’s important to keep up with things so you don’t come across as technically challenged.  I realize this post is shorter than normal, but my acoustic coupler modem, picture below, is acting up. 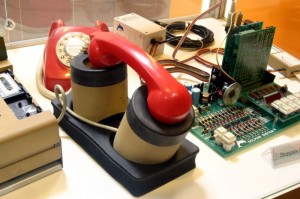 Domain Sales Email – From a Domainer to a Domainer

If the new gTLDs some into play then the www will be very usful. I agree, currently most internet travelers, when seeing dot com, know it is the internet brand address. In the future www will help in branding and advertising the new gTLDs. Example:

Michael, your example is a good one. Definitely more pleasing, or at least more familiar, to see the www in that example.

Funny, I did not write the http://

I guess even your blog needs the “www” to understand that it is a web address ;>

While I’m on the fence with regards to the “www” (there are still many many people that know the domain/web address they are looking for but yet type it into a search engine instead of typing it into the address bar), when it comes to phone numbers I think the country code should be included where possible. After all in a global world it has actually become more important than before.

Frank, “there are still many many people that know the domain/web address they are looking for but yet type it into a search engine instead of typing it into the address bar…” I’ve done that myself, out of habit.

Annyway, even with the www. most will continue thinking the .com is missing (including domain recognition scripts) on new extension domains.

The success of these new extensions is far to be guaranted!

Francois, I can see that being a problem, especially if we get into the long TLDs.

I can’t believe nobody has called out your sweet red phone and is that a mini-cassette beside it? I think I still have a Trash 80 in my parents attic… ummm, I loved monochrome – didn’t have to worry too much about UI back then.
🙂

A Creative Idea for Selling Domains