Lately, I’ve picked up a few dot org domains.  There are still some great keyword dot orgs to be found at decent prices.  While conducting a search, I came across Meat.org and the message it conveyed.  I reached out to Joel Bartlett, Director of Marketing for People for the Ethical Treatment of Animals (PETA) to find out more about how they are using the name and how they are leveraging domains.  I’m not a vegetarian by any means, but I can’t deny the impact this site has at first glance. 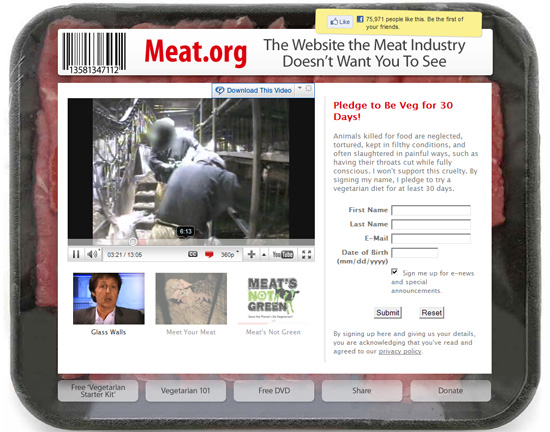 Mike: I came across the domain Meat.org and the strong message it conveys. How valuable has the domain name been in your campaign?

Mike:  For those who have not visited the site, can you explain what the main message is that you are trying to convey?

Joel:  The best thing that you can do to stop cruelty to animals is simply to go vegan today.

Mike: Does PETA own any other domain names?

Joel: PETA has many domains for our various campaigns. On RinglingBeatsAnimals.com, you can watch PETA’s undercover video footage of Ringling employees beating elephants with sharp, steel-tipped bullhooks (devices that resemble fireplace pokers) and view photos of how baby elephants are stretched out, slammed to the ground, gouged with bullhooks, and shocked with electric prods in abusive training sessions that go on for several hours. On McCruelty.com, you can join PETA’s campaign to get McDonald’s to stop practices such as scalding live birds and instead adopt a less cruel method of slaughter. PETA has many more sites, including CanadasShame.com, DKBunnyButcher.com, and even LettuceLadies.com.

Mike: Did you acquire Meat.org as the original registrant or did you purchase the name on the after market? If the latter, can you explain the process that you went through?

Joel: Meat.org was created as a pro-vegetarian site by a forward-thinking animal rights activist in 1998. The site was given to PETA for free in late 2005 in order to take the message to even more people.

Mike: While dot org is often used for non-profit organizations, have you found it to be any less significant than a dot com name?

Joel: PETA does own both .org and .com domains, and when possible, we buy both for our websites. For our primary site, we feel that the .org is important because it highlights that we’re working for good—not for profit.

Mike: Can you share the number of visitors the site receives?

Joel: Meat.org has received close to 1 million page views in the past year! Every day, people who come to the page take the pledge to go vegetarian. Visitors to the site can also order a free vegetarian/vegan starter kit filled with delicious recipes and tips on switching to a vegetarian or vegan diet.

Mike: How has the meat industry reacted to Meat.org?

Joel: Our site’s subtitle is “The Website the Meat Industry Doesn’t Want You to See.” We know that the meat industry is feeling the heat from PETA’s online work. The following excerpt from the industry publication Feedstuffs provides just one example:

It took Hormel Foods Corp. 117 years to build its brand’s credibility but just moments to lose much of the consumer trust the brand had established, according to Brian Stevens, Hormel’s director of pork procurement. Stevens, speaking to delegates to the National Pork Forum in Dallas, Texas, reviewed what happened last year after People for the Ethical Treatment of Animals (PETA) released undercover video showing abusive behavior toward hogs by workers on a farm from which Hormel procured hogs.

PETA released two videos and demonstrated at customer sites, and animal abuse charges were filed against the identified workers over the course of four months— all of which created considerable media coverage, he said, adding that the consequent negative publicity generated more than 30,000 calls, e-mails and letters to Hormel, as opposed to 1,500 that were generated by the company’s largest-ever product promotion.

We encourage everyone to watch the “Glass Walls” video narrated by Sir Paul McCartney on Meat.org and take the pledge to go veg.

Gary Vaynerchuk on Domains, plus – get a free copy of his new book

Accept it! Domaining is NOT going to change...

Hey Mike, glade your back! Your interviews are always awesome! That video is crazy on meat.org hopefully its not all that bad!

This is the kind of information that kids and teens see and decide that they have to be vegetarians. I understand that you all have a message that you wish to convey but the health and welfare of my children both mentally and physically is paramount. You should have an age limit on the people that you are trying to reach. I don’t advocate cruelty to animals but my 11 year old SICK child is now saying that she can’t and won’t eat meat AGAIN because of those images. I think it’s unfair and cruel of you all to expose children to those images. If this is how you get your message across for people to be vegans then shame on you!!! I hope she stops having nightmares soon.

I think it’s a great letter. I instantly delete the sales pitch kinds you guys seem to be advocating.

Don't compare your #domain success against anyone else. Compare to how you did yesterday, last week, last month, and last year.

Reply Retweet Favorite
If you don't send that outbound domain sales email, the answer is automatically "no." #domainnames #domainsales

Reply Retweet Favorite
"The only way to discover your strengths is through feedback analysis. Whenever you make a key decision or take a k… https://t.co/ECM11YkapO

Reply Retweet Favorite
Who are your domain mentors? You don't need to know them personally. Just follow the clues they leave.

Amazon.com Affiliates – Back in the Game!